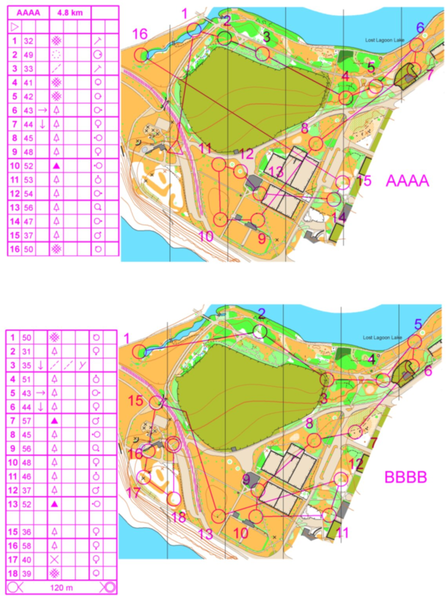 Thanks everyone for coming out to this farsta course! We had 46 participants. The mass-start had 26 runners. I unfortunately misplaced the last control (it was placed on a bush to the SE of where it should have been). I apologize for this! This resulted in some chaos at the end, which I have tried my best to fix in the results.

In the mass-start, Nathan "Detroit" Barrett took command from the start and passed through the first loop first with a 20s lead over Gilles Delmèe. Nate maintained the speed on the second loop and had a small lead going through the tunnel near the end. Unfortunately the badly misplaced last control sent Gilles searching for 2 minutes.

In the women's division Catherine got an early lead on the first loop, but Louise -- with a shorter second fork -- caught up and they were neck in neck coming through the tunnel. Unfortunately the last control again messed up what would have been an exciting finish sprint.

This week's WET is at Stanley Park. Meet in the parking lot at second beach (intersection of Beach Ave. and Lagoon Dr.). A two-loop course in the urban park area near Lost Lagoon will be offered. A mass-start for those interested will take place at 6:45pm. The two loops are forked so you will see lots of other runners out there going to different controls than you. There are options for beginners to cut the course short.

Photos are from Flickr. To add your photos to this section, tag your Flickr photos with: whyjustrun888 (all one word)