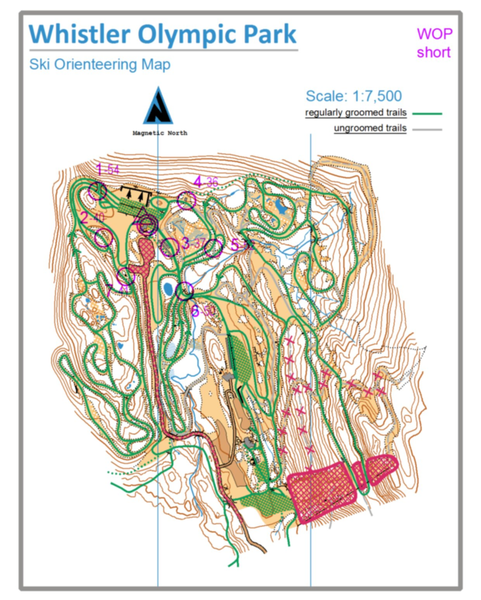 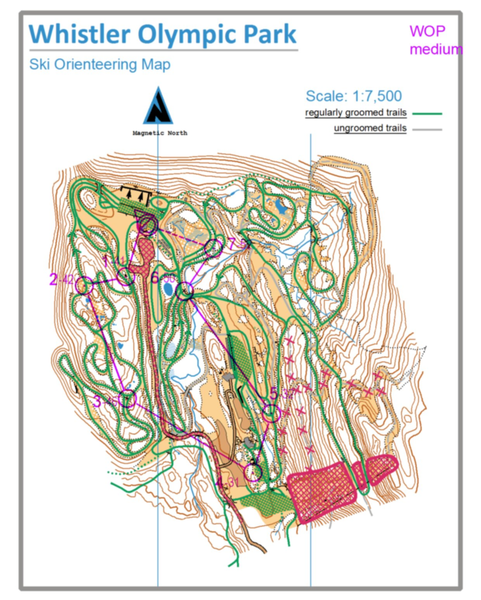 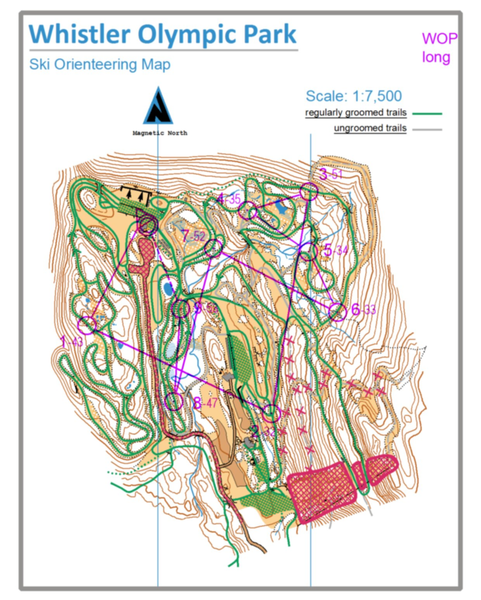 New snow and un-groomed trails made this Ski-O one to remember! Competitors first completed a 'sprint' race, which, with the deep fresh snow and small number of groomed trails, was more like a middle distance!

Then came the relay! Fastest skiers from the middle were paired with the slowest skiers to form teams.

A huge thank you to Adrian, Louise, Meghan, and Russell for their mapping and course planning/setting!

If you've been skiing at WOP this year you will have noticed a lot of orange and white orienteering markers out on the trails. These have been used by the schools program to introduce kids to ski orienteering.

On April 1st we're going to give everyone a chance to do some ski orienteering. There will be two races, starting at the biathlon area.

At 11am we'll set a short course around the biathlon and Olympic trails that will test your knowledge of the ski trails at WOP and your ability to figure out the fastest way between the markers that mark the ski orienteering course. The fastest skiers will take 12 - 15 minutes to complete this "Sprint" course.

Immediately following, about noon, we will have a club relay. Teams of two people ski twice each on courses that will take you around the biathlon and Olympic trails.

Location / Registration
Meet at the wax rooms at Biathlon stadium. Registration from 10:30

What should I bring?
Wear normal cross country ski gear. Also bring a lanyard to hold the map - one with a end that twists completely around is ideal. A compass is optional - and a little bit tricky to carry while skiing ;-)

Will I enjoy this?
Probably. Most people do. Partly it is the novelty of skiing trails in an unusual order, partly it is the challenge of picking a better (i.e. shorter, less climb, easier to navigate) route to a control, and partly it is the joy of a "treasure hunt" with lots of orange & white 'treasures'.

I've never done this before
A number of orienteering gurus will be on-call before the race starts to give a brief introductory clinic, explaining the way the sport works and all you need to know to successfully have fun on these courses.

Does the map reflect current grooming conditions
Nope - this is too low key an event for that! There is a chance you will choose a track that looks as if it should be fast, but is ungroomed.

Grooming depends on the weather. With either a small accumulation of snow or none at all, all of the ski trails should be groomed. This will include; Olympic Biathlon, Olympic Nordic Combined, Neverland, Biathlon Connector, Olympic Cross Country, Inside Passage which are the trails shown on the Ski-O map. In the case of a heavy snowfall during the event the trails that will be re-groomed (rolled only) are; Neverland, Inside Passage, Glide Connector and Porter’s Glide. Olympic Biathlon, Olympic Nordic Combined, Olympic Cross-Country will have been groomed early in the morning but will not be re-groomed during the day.

Can I ski on ungroomed trails?
Yes.

Can I go off the trails?
No. There are numerous hazards including tree wells, creeks, and avalanche hazards within the site.

Note that there are some "short cuts" between tracks that you are allowed to take. These are marked in light grey on the map. In general, if the tracks come really, really close together, then it is okay to cross between them.

What about the one-way sections?
You must obey the no-entry signs. These are there for safety reasons - generally steep hills are one-way only.

One way sections of track are marked in the terrain with "Do Not Enter" signs, and on the map with an arrow pointing in the permitted direction of travel.

Photos are from Flickr. To add your photos to this section, tag your Flickr photos with: whyjustrun775 (all one word)